Hung Parliament takes influences of a hip-hop background, such as sampling and hard-hitting beats, and combines these with his love of 80s and 90s alternative rock, pop and indie music, such as New Order, Weezer and the Wedding Present. With his music he also hopes to conjure the relatability and aesthetic of bedroom pop artists such as Clairo, by incorporating subject matter and influences from his personal, everyday life.

Alastair Tibbs is an alternative electronic singer songwriter with elements of rock from Glasgow, Scotland. With influences ranging from Jack Garret to Biffy Clryo, Bon Iver and more, Alastair Tibbs creates an infusion that excels his powerful song writing ability with his vocal aptitude. The atmosphere he creates at live shows has a lasting impact with his audience that is recognised by his strong following. Alastair Tibbs produces and writes original material which he wants to share and has done so by supporting local band The Havanas at a packed show at The Hug and Pint and by headlining a venue for Oxjam Takeover Glasgow 2017 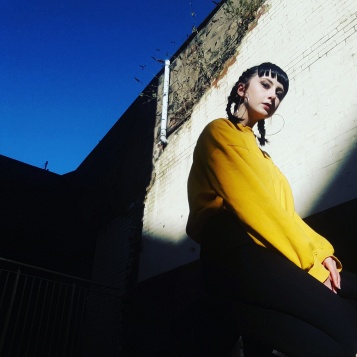 KLEOPATRAS dark pop beats combined with melodic lines, catchy hooks and a cinematic feel will draw you in and take you on her journey. Her comeback to the live music scene only began in September 2019 and has seen her perform at Resonate Live and Tenement Trail 2019. With two powerful singles out on all streaming services totalling over 40, 000 streams and a striking live show that will have you wanting more.

Sly At Last are a five piece indie-rock band from Inverness. Now residing in Glasgow, the band have been recording and gigging around the City. Sly At Last have been through the Hit The Road development process backed by Scottish Music Centre, touring around Scotland and recording a single. Since then the band have developed their sound, recorded and released a self titled EP. With a string of gigs behind them, Sly At Last are experienced enough to bring an energetic show!